HomeNews
We are looking to immediately create a new permanent full-time position on our warehouse team. Specific duties include: Emptying/Sorting Recycling and Waste bins. Power-washing empty, smelly compost totes. Operating various Recycling Equipment, including downstroke balers, styrofoam compactors, and cart tippers. Most work will be inside a warehouse environment, but a clean driver’s license is an asset. Must be available Monday to Friday. The work is hard, but very rewarding, knowing you’re helping make a big difference for the environment, and your community. Starting wage: $13.50/hour. Full medical and dental benefits after three months. Please submit your resume by email or drop by our rePOT.

reFUSE was recognized by the US Trade & Commerce Institute (USTCI), for the 2013 Canadian Excellence in Commerce Award. That’s kinda nice.

Shannon Moneo A street peddler of a different kind, Darren Douglas rides a $4,000, custom-built tricycle through the city’s downtown, picking up odour-emitting organic waste from businesses that is later converted into compost. The zero-emission service, called reCYCLISTS, is the ultimate in green recycling. At a recent stop, the 48-litre green bin he carried out was heavy and “nasty-smelling.” That was now behind him as he once again headed out on the road, deftly and quietly navigating Government Street. In front of him though, he faced diesel fumes from trucks and the rumble of other motor vehicles.ReCYCLISTS is the green vision of two trash-talking men, Aaron Bichard, 34, and Jason Adams, 36.

It seems like Jason Adams was born to recycle. As part of a business degree at UVic back in the nineties, Adams offset the cost of his education by making three to four trips to the landfill a day when he helped bring “The Rubbish Boys” to Victoria. They went on to become 1-800-GOT-JUNK? He went on to a job with Penner Recycling and pioneered paper recycling from Victoria offices.

reFUSE Resource Recovery has been recognized with the 2006 Greater Victoria Chamber of Commerce Business Excellence Award for Environmental Leadership. 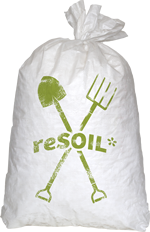 The Good Earth
Made entirely of organic waste and yard and garden trimmings.

FIND reFUSE AT THESE 2014 EVENTS